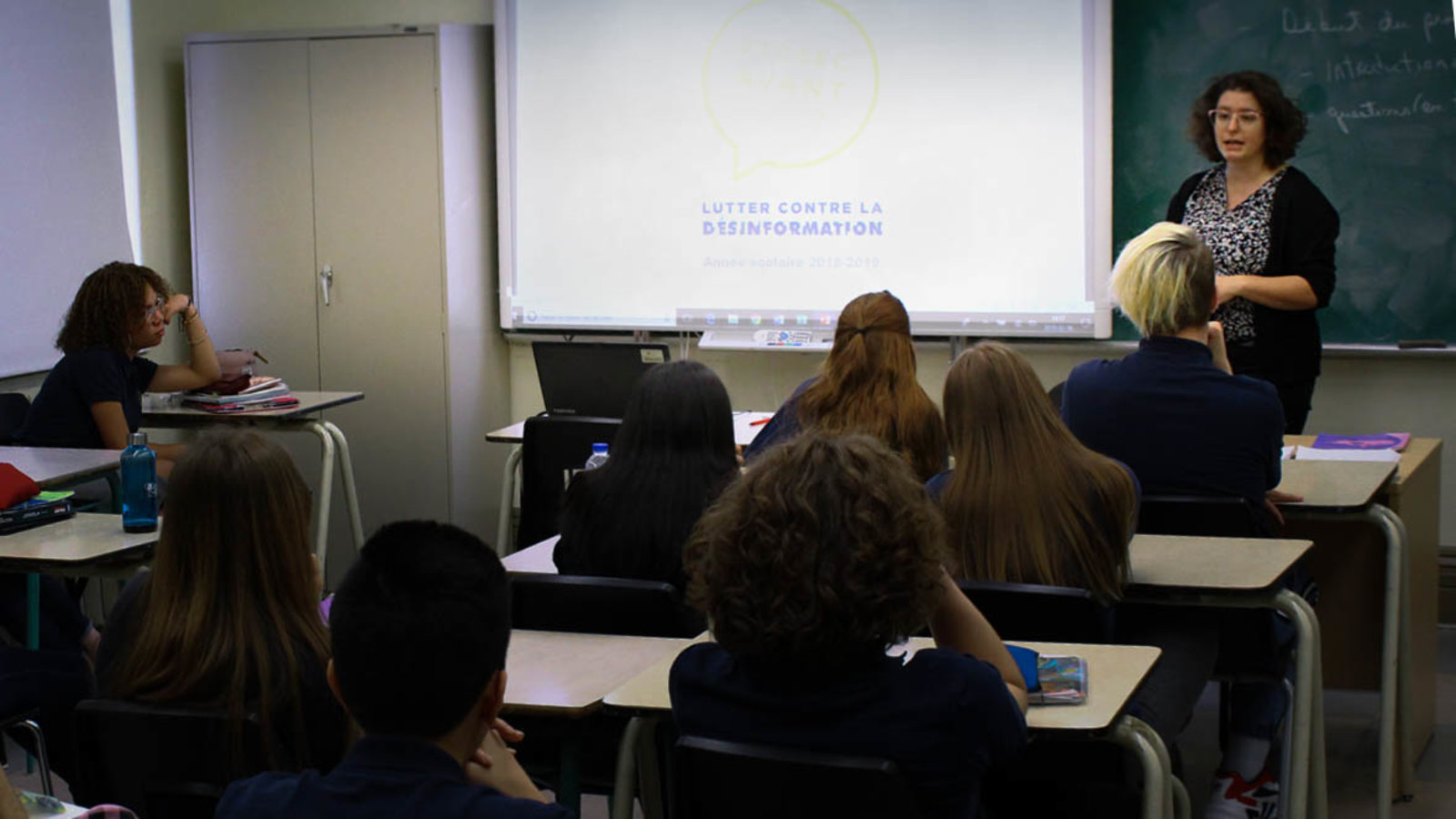 “It was an ambitious project from the start. And it turned out to be a winner—literally!" says Josée Nadia Drouin, Director of Agence Science-Presse, when she was contacted to comment on the "journalist-in-residence" project she initiated last year.

The activity was developed and led by Gabrielle Brassard-Lecours, a highly motivated independent journalist who decided to share her passion for the profession of journalism with young people. The pilot phase was conducted from February to May in a Secondary V class at Chomedey-de-Maisonneuve School in Montreal.

“The young people enjoyed this activity a lot, and many of them really appreciated its practical side,” Gabrielle exclaims enthusiastically. In addition to detecting misinformation traps, the students had to find a fake scientific news item that they wanted to debunk. Then, in teams, they had to produce a text or an audio or video document to explain their verification procedure.”

"They were involved in every step of the activity and were proud to present the final results of their assessment before friends and family who attended the evening event held at the Maison de la culture Maisonneuve at the close of the eight-week workshops," the journalist and host said.

While the activity required a certain amount of coordination in order to fit in with regular class schedules and content, Gabrielle found two formidable allies in the French teacher and the science teacher. "It's a very rewarding program. As a journalist, you can also contribute experience in the field that teachers don’t necessarily possess.”

Isabelle Boisvert, cultural mediation coordinator at the Maison de la culture Maisonneuve, agrees. She is the main link between the school and the Agence Science-Presse and supports the project 100%. She had no hesitation about recommending it to the teenagers she works with. "The teachers were as enthusiastic about it as their students," she added.

“It was a great project, and highly relevant, since young people are more closely involved with technology than ever. They were able to access the Internet to do the research for their work in class. You won’t be surprised to learn that there was no shortage of fake news.”

What first attracted her to this activity was the human factor involved. "I’m someone who enjoys working with people with fundamentally human values. Josée Nadia and Gabrielle are two of those people.”

As journalists, they could not have been more involved. They really are the best collaborators we could have had. I helped set up the time slots, the contacts between teachers and the Agency, but they built the project so well that it was more than a pleasure [to accompany them in the process].

Moreover, what she takes away from this adventure is the pleasure of seeing young people working in teams, searching for information and watching them have fun together. She enjoyed watching them discussing and arguing with each other. She also points to the students' presentation evening at the Maison de la culture as one of her fondest memories. "They were really involved. They even created characters for themselves,”

Since its pilot phase, the project has evolved, taking feedback and in-class experiences into account. In particular, it has been reduced from eight to five sessions so as to focus on the practical component of the activity, the part that students found most stimulating.

"To allow other schools to benefit from this activity, a competition will be launched shortly! ", Josée Nadia announced. The cash prize won last June will be reinvested to offer three journalism residencies, one in Montreal or Quebec City, and two others in the regions. Stay tuned! "In the meantime you can see a summary of the experience by viewing this clip.